The Spirit of the Land Grant College

This mural adorns the wall above the entrance of the HSSE Library. The mural, a gift of Mr. and Mrs. Walter Scholer and Mr. and Mrs. Robert Bruce Stewart, visually presents the contribution of the land-grant colleges to American higher education. It was dedicated in a special ceremony on October 2, 1961.

Click here to view the mural in its entirety.

About the Artist: Eugene Francis Savage

Eugene Francis Savage was born in Covington, Indiana. In 1912, while studying at the Chicago Art Institute, he won the Prix de Rome in painting, enabling him to study at the American Academy in Rome where he received a BA degree. Later he received bachelor and master of fine arts degrees from Yale where he taught for 28 years. Other murals by Savage are at Columbia and Yale universities and in Connecticut, Illinois, Indiana and New York public buildings. - Campus Copy, October 1961 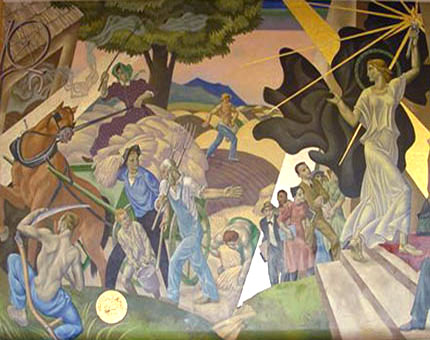 This first panel, with its toiling farmers and horse drawn wagon, represents the state of nineteenth-century agriculture and technology. To the right a robed figure, representing Education, pushes back the dark curtain of ignorance and leads young students through. 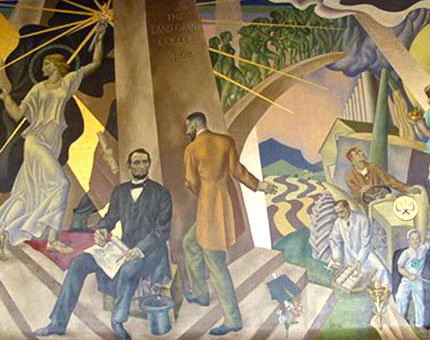 Here we see President Abraham Lincoln signing the Act to create the Land Grant colleges, opening a new era in American education. The figure to Lincoln's left is Representative Justin S. Morrill of Vermont, who sponsored the Act, shown here conferring with the President. In the background we see students passing through the curtain of ignorance to become new graduates. These graduates are shown crossing over a bridge, under which are scenes representing the advancements produced thanks to the Land Grant college. 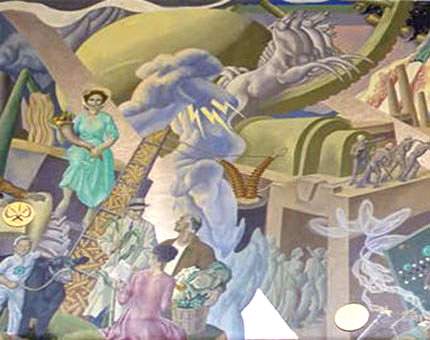 Here we see in more detail some of the benefits of the Land Grant college: Agriculture, made mechanized and producing more abundant food thanks to a greater understanding of life. Engineering: tapping new sources of power and creating new methods of production and transportation. 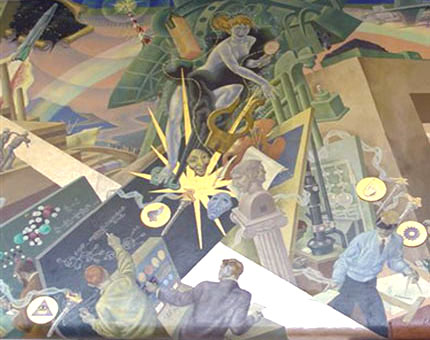 The benefits of the Land Grant college continue with Science, and the Liberal and Fine Arts (represented by the lyre and, artists palette theatrical masks and Janis bust). Above it all a figure, representing Truth, emerges from a cloud, crushing under her foot the mask of Falsehood. The line surrounding Truth is in fact a coded quotation from the Roman poet Lucretius. 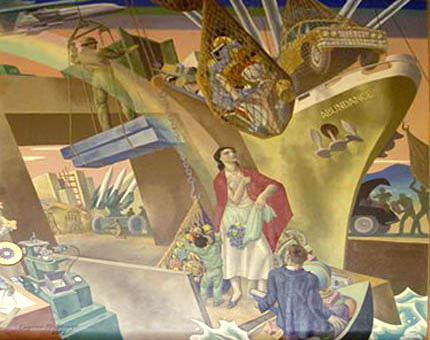 The final panel shows great benefits to society from the Land Grant college. The many goods made possible by the learning of the educated are loaded onto a ship named Abundance, to be distributed to the world.