IN RESPONSE TO COVID-19: All Purdue Libraries are closed until further notice. All Libraries services have moved online. We are unable to provide access, delivery, scanning, or lending of any physical books or materials at this time. Due dates for all items will be extended and no fines charged.
Home > Libraries > Hicks Undergraduate Library > Hicks Namesake 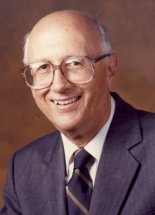 A Biography of John W. Hicks

John W. Hicks was born in Sydney, Australia, where his father was an executive with Paramount Pictures. As a preteen he moved with his family to New Rochelle, New York, and in 1939 entered Massachusetts State College (now the University of Massachusetts). His education was interrupted by World War II.

Mr. Hicks served in the Army Air Corps for three years in the Pacific Theater, stationed on the islands of Saipan and Guam. After the war he returned to Massachusetts to finish his bachelor's degree. Because of postwar overcrowding, he took some of his courses at nearby Vassar College, making him one of the first men to attend what was then an all-female institution.

John Hicks came to Purdue in 1947 as a student and earned his master's and doctorate degrees in 1948 and 1950, respectively. After completing his degrees, he began teaching agricultural economics. His love of poetry was expressed in his teaching style. He was so popular with students, his freshman Agricultural Economics course was called "Fun Hour One." In 1955 he was appointed executive assistant to Purdue President Frederick L. Hovde. In addition to Hovde, Hicks also served as executive assistant to Purdue President Arthur Hansen. In 1982 Hicks was named acting president, a position he held until 1983 when Steven Beering became president. Beering appointed Hicks senior vice president, a position in which he served until his 1987 retirement. He was also an emeritus professor of agricultural economics and continued teaching until January 1995.

The John W. Hicks Undergraduate Library is a tribute to his contributions to the university, students and community. In the early 1980's, he played an instrumental role in convincing the Indiana General Assembly to approve funding for the facility, including advising a student group to lobby for the library's approval. As Acting President, Dr. Hicks participated in the Undergraduate Library's dedication ceremony in October 1982. The library was later renamed in his honor on April 21, 1990.

The Hicks family are active contributors to the development of the Undergraduate Library's collection and promotion of the library. Their legacy of improving the library for Purdue undergraduates will live on.

(Note: Portions of this article originally appeared in the January 1st, 2003, edition of "Inside Scoop", a publication of the Purdue Libraries.)